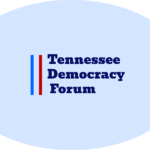 The Tennessee Democracy Forum today announced that it will host a series of a half dozen “Conversations on Democracy” to build support for a pro-democracy movement in Tennessee. Each conversation – both live remote and in person – will be an hour-long discussion of economic and political democracy focused on ongoing national and statewide issues. The Conversations will be open to the public and there will be an opportunity for questions and answers from the audience.

The first conversation will be virtual on May 26th and will feature Christine Todd Whitman, former Republican Governor of New Jersey and EPA Administrator under President George W. Bush and Norman Eisen, former Ambassador to the Czech Republic and White House Ethics Czar under President Barack Obama. Whitman and Eisen are co-founders and the co-chairs of the States United Democracy Center, a nonpartisan organization advancing free, fair, and secure elections that focuses on connecting state officials, law enforcement leaders, and pro-democracy partners across America with the tools and expertise they need to safeguard our democracy.

On June 13th, William Kristol will participate in a live conversation in Chattanooga. Mr. Kristol is a founding director of Defending Democracy Together, an educational and advocacy organization dedicated to defending America’s liberal democratic norms, principles, and institutions. Kristol was a founder of the Weekly Standard in 1995 and edited the influential magazine for over two decades. Mr. Kristol served in senior positions in the Ronald Reagan and George H.W. Bush Administrations.

On August 18th, former Under Secretary for Rural Development of the U.S. Department of Agriculture Lisa Mensah will participate in a live conversation in Chattanooga. Ms. Mensah is President and CEO of Opportunity Finance Network, the nation’s leading network of Community Development Financial Institutions. She is a nationally recognized expert on rural poverty and was the founding Executive Director of the Initiative on Financial Security at the Aspen Institute. At the Ford Foundation, Ms. Mensah managed the country’s largest philanthropic grant and loan portfolio of investments in rural America.

On September 13th, Robert Shrum, the Director of the Center for the Political Future and the Carmen H. and Louis Warschaw Chair in Practical Politics at the University of Southern California, will participate in a virtual conversation. Professor Shrum was a speechwriter for Senator George McGovern in the 1972 presidential campaign and for Senator Edward Kennedy in the 1980 presidential campaign. He served as the Senator’s Press Secretary in the early 1980s and as a political consultant and strategist in his subsequent Senate campaigns. He was a strategist in over 25 other winning U.S. Senate campaigns, eight successful campaigns for governor, successful campaigns for mayors in major American cities, and numerous campaigns for Congress and other statewide offices.

Salin Geevarghese and Andrea Bernstein will participate in forums later this year.

Mr. Geevarghese, President & CEO, SGG Insight and Senior Fellow at the Center for the Study of Social Policy will participate in a live conversation in Chattanooga. He is the son of Asian Indian immigrants and raised in Chattanooga, is an expert on place-based policies, poverty and economic mobility, equity and inclusion. During the administration of President Barack Obama, he was appointed as Deputy Assistant Secretary at the U.S. Department of Housing and Urban Development and served in senior leadership positions in the interagency Partnership for Sustainable Communities.

Ms. Bernstein, an award-winning journalist, will participate in a virtual conversation. Ms. Bernstein was the Peabody Award–winning cohost of the acclaimed WNYC/ProPublica podcast Trump, Inc., which won the prestigious 2019 Alfred I. duPont–Columbia University award. She was also the author of the 2020 New York Times bestseller, American Oligarchs. Ms. Bernstein’s latest podcast Will Be Wild examines the events leading up to January 6th and will be released next month.

“Conversations on Democracy” will be hosted by David Eichenthal, a member of the Board of ForwardTN and the Tennessee Democracy Forum. “Over the last four decades, I have worked with and for Democrats and Republicans,” said David Eichenthal, former Chattanooga City Finance Officer under then-Mayor Bob Corker. “While there have always been sharp differences on issues, there had always been a bipartisan agreement and fundamental faith in the Constitution. But today, there is an existential threat to our democratic form of government. We need a public conversation about democracy to rebuild public support for democracy.”

The University of Tennessee at Chattanooga will be the venue for the live presentations and is a partner in the “Conversations on Democracy” series. “As an institution of higher education, UTC is fully committed to supporting a civil conversation about democracy,” said Professor Deardorff, Chair of the Political Science and Public Service Department at UTC. “We welcome the opportunity to bring national speakers to our students, to the Chattanooga community and to all Tennesseans.”

For more information on the “Conversations on Democracy” series, go to www.tndemocracyforum.org.

The Tennessee Democracy Forum is a Tennessee not-for-profit corporation and is leading the series as a project of ForwardTN. ForwardTN is a non-partisan, non-profit organization that supports causes and organizations working to make Tennessee a fairer, healthier and more equitable state. ForwardTN focuses on elevating voices that educate the public and expose the harmful effects of extreme partisan or corrupt policies, leaders and organizations on the wellbeing of Tennessean lives and serves as a resource to bring diverse, marginalized, or suppressed voices into public debate who need to be heard.

For more about ForwardTN go to www.forwardtn.org.