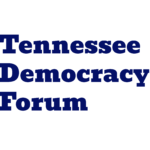 January 6 Committee Hearing and Poll Results Will Be Focus of Second Conversation on Democracy with Conservative Commentator Bill Kristol, Live in Chattanooga

On the eve of Thursday’s scheduled prime time hearing of the January 6th Committee, a poll conducted by Embold Research for the Tennessee Democracy Forum found that Tennesseans strongly support pro-democracy measures that would check presidential power. Voters were asked their views on provisions of the Protecting Our Democracy Act, which passed the House of Representatives with bipartisan support in December 2021:

The poll also asked voters their view of candidates for Congress who voted against certification of the 2020 presidential election after the events of January 6, 2021. In results released earlier in May, the poll found Tennessee voters nearly evenly split on who they thought had won the 2020 election and on whether January 6th was an insurrection. Voters were asked, “[T]hinking about the 2022 election for Congress, if a candidate voted to block the certification of the presidential election after the January 6 attack on the U.S. Capitol, how likely would you be to vote for them?”

All 7 Republican members of the Tennessee House of Representatives delegation voted against certification of the 2020 presidential election results. Both of Tennessee’s two Republican senators – Marsha Blackburn and William Hagerty – voted for certification.

The results of the poll and the first hearings of the congressional January 6th Committee will be the focus of the Tennessee Democracy Forum’s second Conversation on Democracy with Bill Kristol on Monday, June 13th at 7 p.m. ET on Zoom. Attendees can register at https://secure.everyaction.com/lbEazZX12kOFaoaJDHn6bg2.

“While Tennesseans are split on the 2020 election outcome and the events of January 6th, there are clear and strong majorities in support of elements of the bipartisan Protecting Our Democracy Act,” said Emily Eichenthal, Tennessee Democracy Forum coordinator. “As Congress looks at the events of January 6th, we’ll be focused on what steps can be focused to protect and preserve our democracy going forward.”

William Kristol is The Bulwark editor-at-large and a founding director of Defending Democracy Together, an educational and advocacy organization dedicated to defending America’s liberal democratic norms, principles, and institutions. Kristol has long been recognized as a leading participant in and analyst of American politics and has helped shape the national debate on issues ranging from American foreign policy to the meaning of American conservatism. Kristol was a founder of the Weekly Standard in 1995 and edited the influential magazine for over two decades. Before starting the Weekly Standard, Kristol led the Project for the Republican Future, where he helped develop the strategy that produced the 1994 Republican congressional victory. Before that, Mr. Kristol served in senior positions in the Ronald Reagan and George H.W. Bush Administrations. Before coming to Washington, Mr. Kristol taught politics at the University of Pennsylvania and Harvard University. He received his undergraduate degree and his Ph.D. from Harvard University.

Embold Research surveyed 1,125 registered voters in Tennessee, with an oversample of Hamilton County, from April 8-11, 2022. Respondents were recruited via dynamic online sampling and SMS text-to-web sampling to attain a sample reflective of the electorate. Post-stratification weighting was performed on age, gender, ethnicity, education, region, and vote history. Weighting parameters were based on voter file data. The modeled margin of error is 3.2%. For more information on Embold Research, go to https://emboldresearch.com/.

The results of the Tennessee Democracy Forum poll will be released over the coming months in conjunction with a series of a half dozen “Conversations on Democracy” to build support for a pro-democracy movement in Tennessee. Each conversation – both live remote and in person – will be an hour-long discussion of economic and political democracy focused on ongoing national and statewide issues. The Conversations will be open to the public and there will be an opportunity for questions from the audience.

For more information on the “Conversations on Democracy” series, go to www.tndemocracyforum.org. The Tennessee Democracy Forum is a project of ForwardTN. For more about ForwardTN go to www.forwardtn.org.